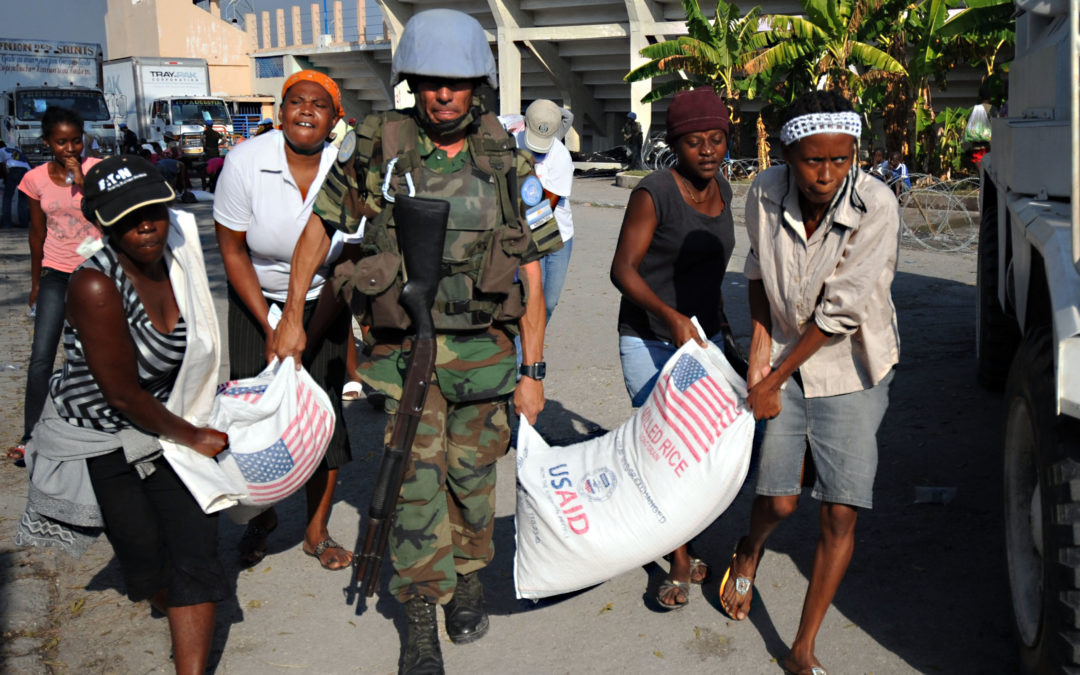 Peace missions or rather their own army in Haiti?

A remarkable news item appeared early July in the Haitian media: the Ministry of Defence invited young men and women to apply for a job in the army. Remarkable, because Haiti has not had an active army for over twenty years. President Jean-Bertrand Aristide disbanded it in 1995, a few months after he had returned from exile.

Let us briefly recall the situation. Popular priest Aristide, elected president during the first ever democratic elections in Haiti, had only been in power for a few months when he was ousted in September 1991 during a coup d’état and forced to flee the country. An extremely violent regime took over power and thousands of Haitians were killed by the military during the years that followed the coup. Thousands of other Haitians fled for repression and poverty and in rickety boats tried to reach nearby islands or preferably the American mainland. After lengthy negotiations with the military regime, with the help of the United States, the Organisation of American States and the United Nations, in 1994 Aristide was able to return to Haiti and finish his term.

In less than a year the army was disbanded, the soldiers sent home, together with their uniforms and weapons,  and in its place a police force was about to be established. Currently, more than twenty years later, this poorly equipped force numbers no more than 13.000 officers, too few to keep control of over eleven million inhabitants. So far, the police did not have to keep control because ever since Aristide returned to power, a succession of UN peace missions took care of that. The goal of the first mission, UNMIH (United Nations Mission in Haiti) was to keep peace and order until after the instalment of Aristide’s successor, René Préval, and to assist the Haitian government at building the police and justice system. This mission was followed by UNSMIH (United Nations Support Mission in Haiti), aiming at support of the still inexperienced and badly equipped Haitian police. The increasing social unrest in the country was the reason why the mandate of this mission was extended for several months on two occasions. Afterwards, the General Secretary of the UN, in consultation with Haitian political leaders decided to establish a third mission, the UNTMIH (United Nations Transition Mission in Haiti). The main goal of this four-months mission (until December 1997) was once again to train the Haitian police so the force in the long term would be able to take over the enforcement of the law in the country. Monitoring the human rights situation and attention for the increasing problems of international drug trafficking were also on the ambitious list of tasks of this mission.

UNTMIH was followed by two more missions with generally the same mandate: to contribute to the building of a police force and to supervise the human rights situation. The past thirteen years these tasks were also part of the MINUSTAH (United Nations Stabilisation Mission in Haiti) mandate, created after Aristide, who in 2000 had embarked on his second presidential term, had in February 2004 once again been forced to leave the country. But in April of this year, the decision has been taken not to renew the MINUSTAH mandate which is ending in October. Does this mean the goals have all been accomplished? Does Haiti now possess a well-trained police force and a reliable justice system, and are human rights being respected? Has security in the Caribbean country increased? Questions to which the answers unfortunately have to be negative, even though the UN Security Council has declared that the growing stability and the successfully implemented presidential elections late last year contributed to the decision to end the mission. Another reason is the financial situation of the UN: lack of funding causes the UN to drastically downscale the number of peace missions.

In the meantime the peace missions in Haiti are well past their final date of expiration. MINUSTAH specifically has been plagued by one scandal after another during the past years. Only a few months ago, Associated Press published an investigation into sex scandals involving blue helmets from various countries. The investigators interviewed hundreds of victims and revealed shocking cases such as a sex ring where over a hundred Sri Lanka peacekeepers systematically misused nine children ten years ago. From Pakistan to Nigeria and from Bangladesh to Uruguay UN soldiers were involved in sex scandals, but especially before 2010 accusations hardly ever let to disciplinary actions, let alone effective prosecution.

In the autumn of 2010, while still trying to recover from the devastating earthquake earlier that year, Haiti was suddenly confronted with cases of cholera. The cholera outbreak quickly rose to become an lethal epidemic, causing the death of 9.000 people while hundreds of thousands became ill. The source of the infection was found to be a battalion of Nepalese peacekeepers, but it took years before the UN admitted this. So far, no compensation whatsoever has been offered to the victims. As a kind of concession, in December 2016 the UN launched  a special fund to combat cholera but of the anticipated four hundred million dollars up until now a mere three million dollars have been pledged, little more than a drop in the ocean.

Recently a delegation of the UN Security Council visited Haiti to talk about the transition of MINUSTAH towards MINUJUSTH (UN Mission in Support of Justice in Haiti). This smaller mission will assist the Haitian government at reinforcing the judicial institutions and the police force, as well as monitoring and reporting on human rights. In fact, the mandate of this new mission does differ very much from those of previous missions. Despite the announced cutbacks at the UN funds are available for this mission, to the amazement of some. The Haitian newspaper Le nouvelliste phrased their amazement last month in an editorial as follows: “How can the Security Council embark on a long-term engagement involving budget for operating costs in all kinds of forms, when nothing at all is provided for compensation of victims of the cholera epidemic at the short-term, or to provide for safe drinking water facilities in order to suppress cholera in the marginalised neighbourhoods? It is clear that from the very beginning of the epidemic the UN has denied taken any responsibility, despite the overwhelming evidence from investigations about the source of the infection.”

There is also amazement about the mandate of the new mission: to monitor the human rights situation. Wasn’t this the task of the recently by the Haitian government pushed aside Independent Expert of the UN for human rights in Haiti, Gustavo Gallón? When he presented in March his most recent report in Geneva, the Haitian government declared that in future they were able to handle thing themselves and no longer needed international supervision. Protests of Haitian and international human rights organisations have been to no avail.

And then there are the plans to revive the army. In the two hundred years of Haitian history the army most of the time did not play a positive part. Military coups alternated and often went hand in hand with bloody repression of civilians. Sometimes rulers created their own units. An example is François Duvalier – Papa Doc – who sent the army home and executed military officers he saw as a threat. As a replacement Duvalier installed a paramilitary unit: the Tonton Macoute who kept a true reign of terror and murdered between thirty- and sixty thousand Haitians. Equally during the nineteen nineties paramilitary groups were active in Haiti, the most feared were united in FRAPH (Front for the Advancement and Progress of Haiti).

The Haitian government considers the revival of the army as a sign of increasing autonomy. The country is stable enough to take care of its own security and border controls and no longer needs to rely on foreign peacekeepers to maintain order. The main tasks of the military will be interventions during natural disasters, fight against smuggling and combat against terrorism, in short “the new force will be a companion of development”, said Minister of Defence Hervé Dénis to Le Nouvelliste. To start with, five hundred young men and women will be recruited, reaching a number of 3.000 soldiers  by the end of President Jovenel Moise’s term in 2022.

In the meantime also former military men are dreaming of a comeback. In a small building in Delmas, bordering on Port-au-Prince, they are training together with young ‘recruits’, mostly the sons of former soldiers. “Maybe most of us are too old for active service, but we can play a role in the secret service or at training new recruits, spokesman David Dormé is saying in Le Nouvelliste. “Once a commander-in-chief has been appointed we will pass to the rank of soldier. We will be the lungs of this army.”

But many Haitians have not yet forgotten what happened not too long ago, like the bloody coup d’état by the army in 1991. Human rights organisations are pointing out the dangers. “This army proposal is lacking the structures necessary for the recruiting process, as well as a legal framework defining the tasks of this army,” said Pierre Espérance of human rights organisations RNDDH during an interview on French television. According to Espérance, the current authorities will create a political militia or a paramilitary unit instead of an army. Questions are also asked about the financial implications of such an initiative. Haiti is a poor country and it would be better when the government would be concentrating on the police force. The force needs to be better equipped and trained in order for the police officers to be able to do their work properly, according to Espérance.