Elections in Haiti not over yet 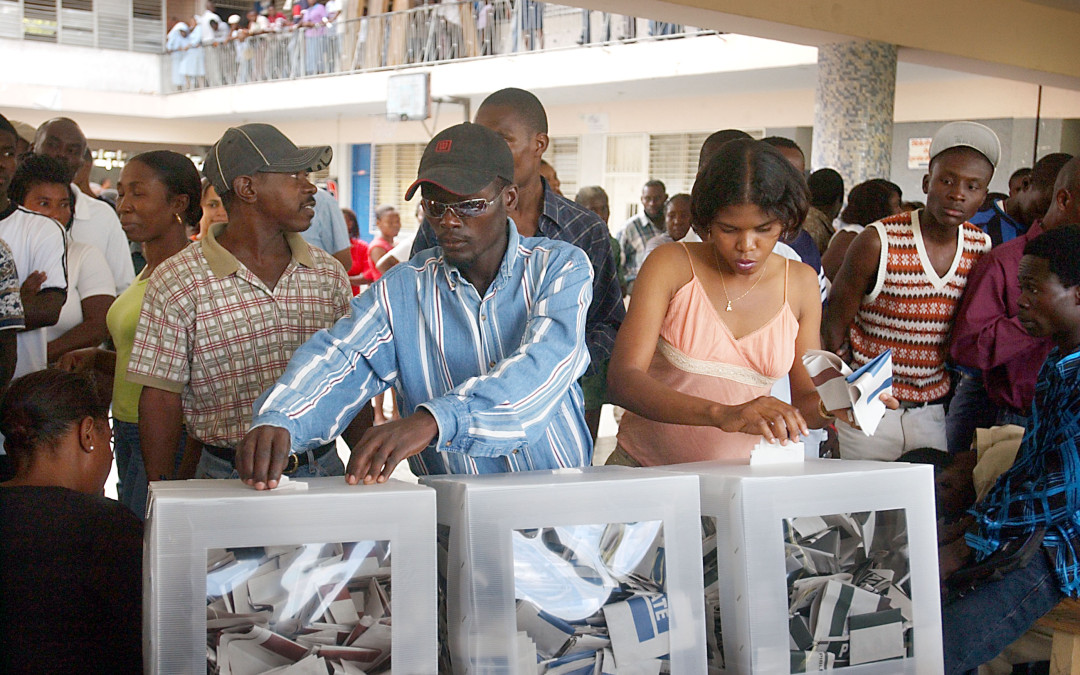 February 7 is a historic day in Haiti: it is on that day that Jean-Claude Duvalier was forced to leave the country ending a nearly thirty-year period of brutal dictatorship. Last February marked exactly thirty years since the end of the Duvalier era, and you would think this to be a cause for celebration, even more so as traditionally the 7th of February marks the day that, in case elections have been held, a new president is installed. At the end of last year presidential elections have been held, but a new president has not yet been installed. What’s more, it is by no means yet certain who will become the successor of Michel Martelly.

Haiti has a complicated system of elections, and because president Martelly had been postponing the elections for mayors and members of parliament until the very last months of his mandate, at the end of 2015 no less than three “election moments” were to take place, at which the population in several rounds could vote for national and local government officials. In August the first round for members of parliament was marked by much violence and irregularities. Both the Provisional Electoral Council (CEP) and the authorities had prepared themselves better for the second round in October, which at the same time was the first round of the presidential elections. Police was now present at the polling booths, and both national and international observers remarked that the elections had passed orderly and relatively calm. But these first, cautiously positive, reactions were soon to be followed by critical reports, especially from Haitian civil society organisations. Although no more than 30% of the people eligible to vote had actually gone to the polling booths, there were clear indications that certain people had voted more than once. This concerned especially the so-called mandataires, people who, representing the political party they belong to, supervise the voting process and have access to the polling booths. According to the law, each party may delegate two mandataires per polling booth, a number that with 54 presidential candidates can grow quite a bit.[i] Just add to this the observers, the members of the polling booths and of course the voters, and it becomes obvious that this will lead to chaotic situations, with abuse and fraud just around the corner.

Haitian civil society organisations as well as a number of international organisations therefore demanded an independent evaluation of the election process to take place before the second and decisive round[ii] planned for December 27. On November 5, the CEP announced the winners of the first round: Jovenel Moïse of president Martelly’s party, and Jude Célestin of the party of former president Préval had ended first and second, and will go to the second round. The protests continued to increase and Célestin joined the protesters, stating that he will not participate in the next elections without a thorough investigation of the election process so far. Postponement of the elections until January 24 did not solve the conflict and the CEP had no other choice than to postpone the elections once again.

In accordance with the Consitution, Martelly resigned on February 7, and a week later the two chambers of the Haitian parliament elected Jocelerme Privert [iii], president of the Senate since January 2016,  as Provisional President. He has been given a precise mandate for a period of 120 days: to organize elections in order that within four months a president can be installed. Privert took nearly two month to form a new, independent provisional electoral council (CEP), to which he also invited representatives of Haiti’s civil society. And after his first attempt failed, he also succeeded in having his candidate, Enex Jean-Charles, accepted as Prime Minister. The elections now have been planned for April 24, but this date is apparently unrealistic. Human rights organisations and other representatives of Haitian civil society rightly stick to their demand that before the second round can be held the previous election process has to be thoroughly investigated in order to avoid that the same mistakes will be made again, and to show the Haitian people that fraud and corruption don’t go unpunished and thus help to restore some confidence in politics and political leaders. During a visit to Washington D.C. early March, Pierre Espérance, director of the human rights organisation RNDDH stated: “I don’t think that (the results of an independent evaluation commission, EH) will change the results of the 4 or 5 at the top of the race but it will help us end impunity and corruption in the country. If you find the truth and seek the truth then we can organize acceptable elections.” [iv]

In the meantime the problems of the country are increasing. Since last year a serious food shortage is threatening because of lost harvests as a result of continuing drought in large parts of the country. Without any urgent measures taken, three million Haitians will suffer a severe lack of food. The Dominican Republic continues to deport Haitian migrants and Dominicans of Haitian descent. Never before the Haitian gourde had such an unfavourable exchange against the dollar: a year ago you paid 47 gourdes to the dollar, now  this has increased to 61, a difference of no less than 30%. And the unrest is rising:  a few weeks ago one-time paramilitary leader and currently candidate to the Senate Guy Philippe threatened with “civil war” if the elections would not take place as planned on April 24. Of course he could just be bluffing trying to put pressure on Privert by using big words, but people will remember Philippe as one of the rebel leaders who in 2004 helped to overthrow president Aristide. Guy Philippe’s political party has friendly relations with the PHTK of Martelly and Moïses and thus will benefit from an election victory of the latter.

The international community, headed by the United Nations and a number of ambassadors, are getting worried and are increasing their pressure on the Haitian government to hold the elections as planned. But a country does not become a full-fletched and trustworthy democracy by holding bad elections. Early March Pierre Espérance of RNDDH remarked in Washington D.C.: “You cannot ask the Haitians to accept the unacceptable”, and he added: “we are not seeking perfect elections, we want acceptable elections.” This will only be possible when the electoral process  will be investigated and evaluated before new elections will be held. The installation of a new evaluation commission – despite diplomatic pressures which considered this “time lost” –can be considered a first victory for Haiti’s sovereignty: Haitians taking the electoral process into their own hands.

Els Hortensius, member of the Steering Committee of the Coordination Europe-Haiti

This article was taken from the bulletin La Chispa (the Netherlands), where it was published 24 March 2016. For the website of the Coordination Europe-Haïti it has been supplemented with the latest political developments since then.

[ii] To win the presidential elections a candidate needs at least 50% of the votes. With 54 candidates it is almost impossible that a candidate reaches this percentage during the first round.

[iii] Minister of economic affairs and finances with Aristide (2001-2002) and advisor to Préval.