Plea for a government policy favouring smallholder agriculture in Haiti 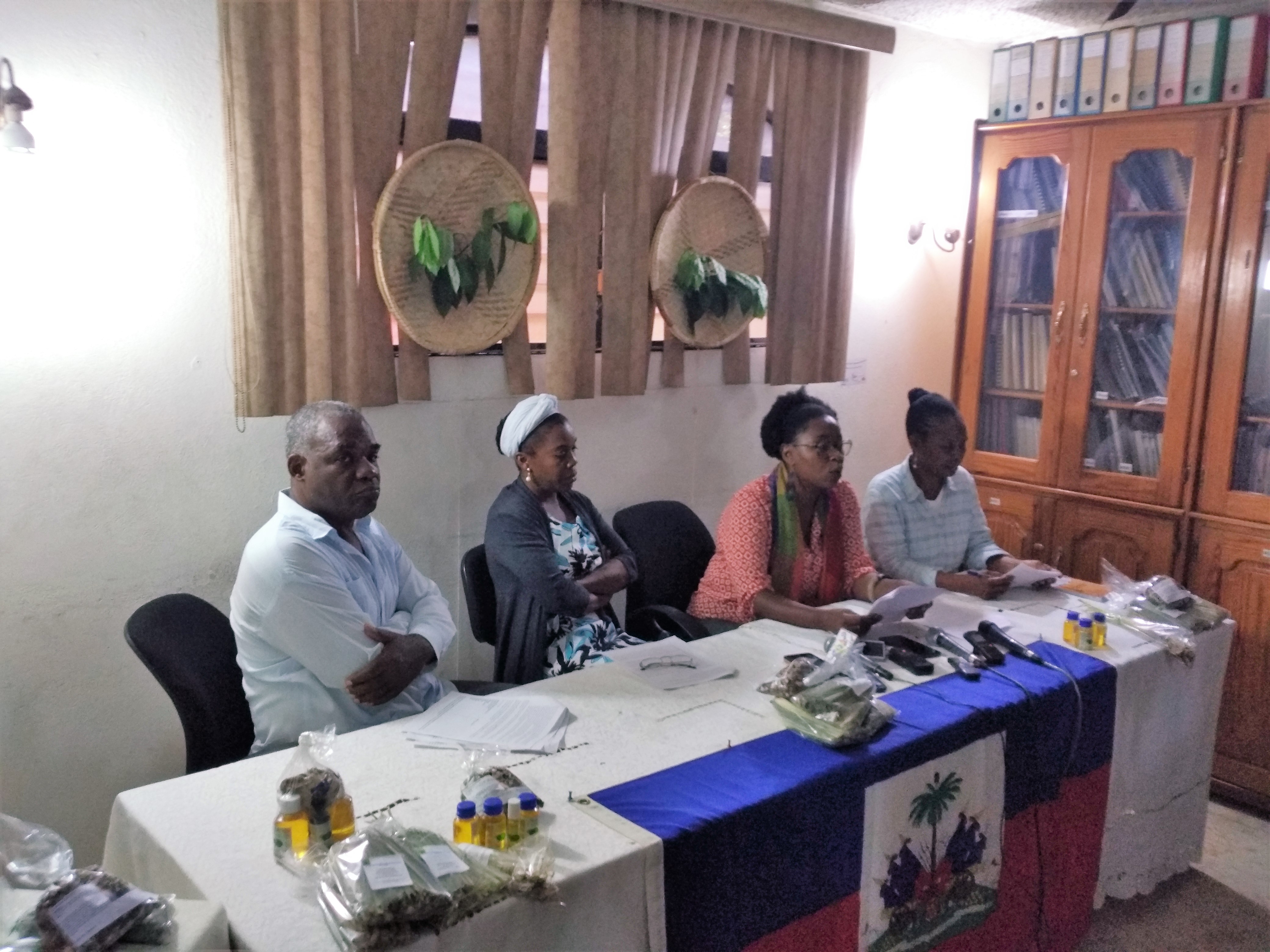 On the fringe of World Food Day, World Rural Women’s Day and the World Day to Overcome Extreme Poverty, Haitian peasant organisations, accompanying institutions and organisations promoting the right to food together organized on October 11, 2017 a press conference to present a package of proposals to support a public policy aiming at the reactivation of the agriculture among peasant families in Haiti. The proposals are the result of a series of reflective meetings supported by research material that these groups (most of them partner organisations of COEH members) have gathered since May 2017, in order to react to the initiatives of the current government leaders in Haiti who indicate that they want to revive the agrarian sector.

As a matter of fact, a few months after he took office, president Jovenel Moise launched a programme called “Caravane du changement”, the  “change caravan”, in the Valley of the Artibonite, a well-known  rice growing area, by repairing a few kilometres of irrigation channels. But he did not present to the nation his goals and strategies for the agrarian sector in general, given that the country has mountains and hills in addition to the plains and valleys . The large amount of resources mobilized so far (over 3 million American dollars and heavy machinery) has caused concern among agrarian organisations because they fear a waste of money if the government does not present clear plans for the whole country. This is why they decided to become pro-active and prepare an agrarian public policy proposal that should guide the politicians and policy makers.

The document containing the proposals takes a firm stand in favour of agriculture among peasant families on which the Haitian agrarian system is based, and it criticizes the approach of the caravan of the Moise/Lafontant government: “We stand up to defend agriculture among peasant families as the foundation of the agrarian system in Haiti. We stand up to criticize the actions of the Moise/Lafontant government who say they want to revive the country’s agriculture through a strategy called “caravane du changement”, which costs a lot of money without anyone understanding how this initiative will have a positive impact on Haitian agriculture which takes place both in the mountains and the plains”, they stated in a paper presented to the press during the conference.

The organisations stressed the need for the country to pursue a clear agrarian policy that aims at the five following goals: 1. strengthening food sovereignty in the country; 2. transformation of traditional gardens into a more sustainable and more profitable agroecological system; 3. the safeguarding of agrarian lands, the provision of more land to peasants, of adequate technical support and other means of production; 4. environmental protection and improvement of degraded areas; 5. the promotion of the agriculture and the introduction of strategies that will encourage young people to invest in this sector and to continue living in the countryside.

The organisations are aware of the fact that the agriculture among peasant families is currently in crisis and needs to be reformed. However, they disagree with the view of certain critics who favour the outright elimination of this system without proposing any alternatives. The organisations wonder if the plans of the current government for a valley region such as the Artibonite are aimed at the promotion of  export agriculture, as has been done in the past, to the disadvantage of the national agrarian system.

Based on a number of surveys, the paper is highlighting the role of the agriculture among peasant families in Haiti’s history and the importance it still holds as of today with regard to the economy, health, culture etc. “Even though the Haitian farmers are working in dire conditions they still produce almost half of the amount of food necessary to feed the country and their labour represents one-fourth (25%) of the Gross Domestic Product (GDP)”[1], pointed out the paper, that criticizes the neoliberal and anti-peasant measures taken by the State as these contributed to the deepening of the rural crisis and to an increased dependency on food imports. “The decay of the peasant agriculture is the result of a lack of investment in the sector and above all of the consequences of the anti-peasant policies of the Haitian political leaders. As a matter of fact, the Haitian state deliberately chose to open the national market to subsidized foreign products, thus facilitating unfair competition with locally grown products of Haitian farmers who did not benefit of any support at all”, says the paper.

The agriculture among peasant families represents a large potency that involves numerous sectors, first of all the men and women farmers, cattle breeders, fishermen, followed by other stakeholders, such as transporters, training institutions, national and local State structures, concludes the paper, which still can be signed by every individual, organisation and institution, national as well as foreign, in solidarity with Haitian farmers and peasants.

More than a million rural families run a small peasant farm, mainly in the hills and highlands, some of them on the plains, producing food for their own consumption and to stock the local and regional markets. It is a very diverse form of agriculture, mainly organic, practised on small plots of land, often without any technical assistance.

After the press conference, which was covered by several Haitian media, the initiators have planned to meet different national and international organisations interested in their proposal, such as the Ministries of Agriculture, of Environment and of Education, as well as donor institutions such as the European Union, whose National Indicative Programme (PIN) for Haiti has as one of its focus areas food security and nutrition.